In this emotionally intense and legal complex arrangement another women (third person) carries and gives birth to child for the willing couple. Surrogacy is gaining popularity as the way to having baby among the parents however it requires lot of time, money and patience to succeed.

Gestational Surrogacy is the way in which IVF technique is used to implant the embryo in the surrogate mothers womb. Embryo is converted from the eggs and sperms taken from the couple who is willing to have their baby. In this surrogate mother only carries the baby for nine months in the womb and she is not at all related to the baby genetically.

With this modern method couples can have their genetic baby carried by other women and even it is called rented womb method.

In the following cases couple may go for surrogacy treatment 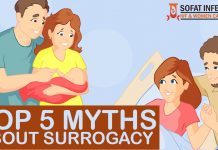 TOP 5 MYTHS ABOUT SURROGACY AND ITS FACTS

When is the Right Time to Consider Surrogacy for Parenthood?