A number of women may take bleeding as a minor issue, but experts say that one must at least inquire from a gynae to make sure that her health and the baby’s aren’t compromised.

Bleeding in the Final Weeks

Bleeding during the second and third trimester of your pregnancy shouldn’t be taken for granted. You ought to consult a fertility specialist or a gynae since it may indicate a problem with your health or the baby’s.

These may be the reasons for the bleeding;

This occurs in case the placenta pulls away from the uterine wall before labor leading to bleeding. Though rare, this bleeding is deadly or dangerous to the baby and the mother.

Also known as a low-lying placenta, it occurs when the placenta remains at the bottom of the uterus and may partially or fully block the birth canal. A placenta previa with no pain is described as an emergency situation.

A uterine rupture commonly occurs when the scar brought about from the previous C-section tears causing bleeding. This requires immediate medical attention and also a C-Section.

This is a situation where the baby’s blood vessels in the umbilical cord emerge to the birth canal. Though rare, this may occur due to uncertain reasons and may cause the developing baby to lose oxygen.

In case a woman experiences bleeding at least a few weeks to her labor this may be an indication of premature labor. This can be observed through a discharge that contains blood and mucus.

Premature delivery may occur due to the contractions of the uterus which causes changes in the cervix (dilation and effacement) that emerge before 37 weeks of pregnancy. This may cause a baby to be born prematurely.

Other causes of bleeding

These factors may cause bleeding during the first trimester.

Bleeding within the first 15 days of conception is termed as implantation bleeding. This occurs as the fertilized egg tries to get implanted in the uterine lining. This may be the first indication that you are pregnant.

In one of our posts, we discussed miscarriages and their effects on women and couples at large. To be sure that you prevent a miscarriage, just consult a gynae or a fertility specialist in an IVF centre in Delhi.

Cancer, polyps, an ectopic pregnancy, infection among others, are some of the common causes of bleeding during the early trimesters. 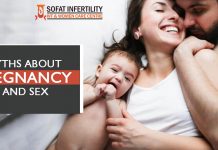 Myths about Pregnancy and Sex

Are There Chances To Get Pregnant Right Before Your Period?

11 Ways To Survive Stress in Pregnancy