IUI is a procedure that is used for treating various infertility problem(male | female). This procedure involves the direct placement of the washed sperms in the uterus (when the eggs are released by the ovaries) so that the egg can be fertilised. It is hoped that the sperms would swim inside the fallopian tube and the egg will get fertilised. With this, normal conception is quintessentially possible. 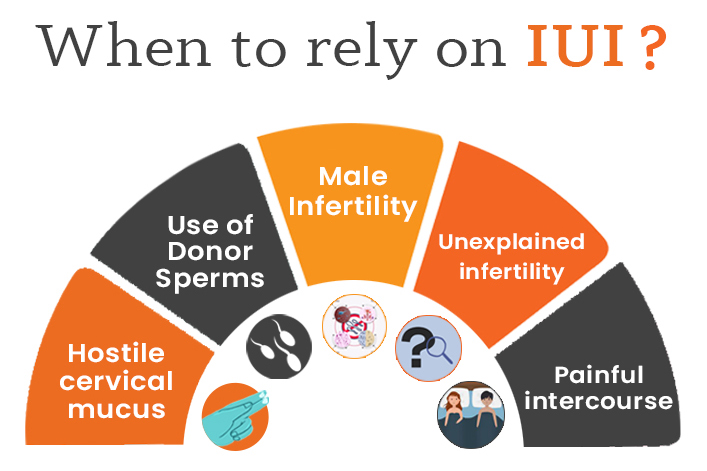 There are so many factors that affect the success rate of conception. So following are the factors that determine whether the couple should seek for conception with the help of IUI or not:

Sometimes, it happens that the cause of infertility is not known which we know as unexplained infertility. So the doctors will not know which treatment he should consider. In that case, the doctors usually try to achieve conception beginning with the medications. When medications don’t work, then the minimally invasive ART technologies are taken into account like IUI and mini IVF. Customarily in many cases, these treatments work.

When a couple is reported to be suffering from endometrial tissue, then the first approach to achieve the conception is taking IUI into account along with the medications.

If the sperms show up mild problems either in the numbers or in the morphology, then these are considered as mild issues and they can still be optimally used for conception by taking the IUI technique into account.

If there are excessive abnormalities in the sperms, then with the help of the donor sperms, the conception can be achieved.

When it is about the donor sperms, then the sperms of some other male who will not be a parent for the child, will be retrieved. Then the conception will be sought with the help of those sperms.

The child will have the traits of the biological father.

The cervical mucus produced by the cervix is responsible for providing an ideal environment for the sperms to travel in the direction of the uterus to fertilize the egg.

When a woman is suffering from ovulatory problems, then the number of eggs may get quintessentially reduced. So in those cases, it becomes necessary to take the IUI procedure into account as the limited number of eggs are there.

If the semen of the male partner is problematic.

Usually, lesbian couples make use of the donor sperm to achieve conception. Apart from that, there may be some other people like the windows or the girls who never want to get married or be in a relationship with someone, they usually opt for donor sperm.

IUI is not recommended to the people who are suffering from:

WHAT TO EXPECT FROM THE INITIAL CONSULTATION?

For proper analysis, the doctor may ask the male partner to provide the semen sample some days before the procedure.  The doctor may analyse the following:

Usually, Semen samples are obtained in the clinics. But in case, you are willing to obtain the sample in the comfortable premises of the home, then you are supposed to bring the sample to the doctor within one hour of release.

When it is about the IUI procedure, then the timing plays a great role. So it is necessary to track the ovulation cycle.

You can see the signs of impending ovulation with the help of the at-home urine ovulation predictor kit.

Based on the semen sample analysis report and the tracking of the ovulation cycle, it will be decided which day will be suitable for performing the procedure and hoping for the best results. 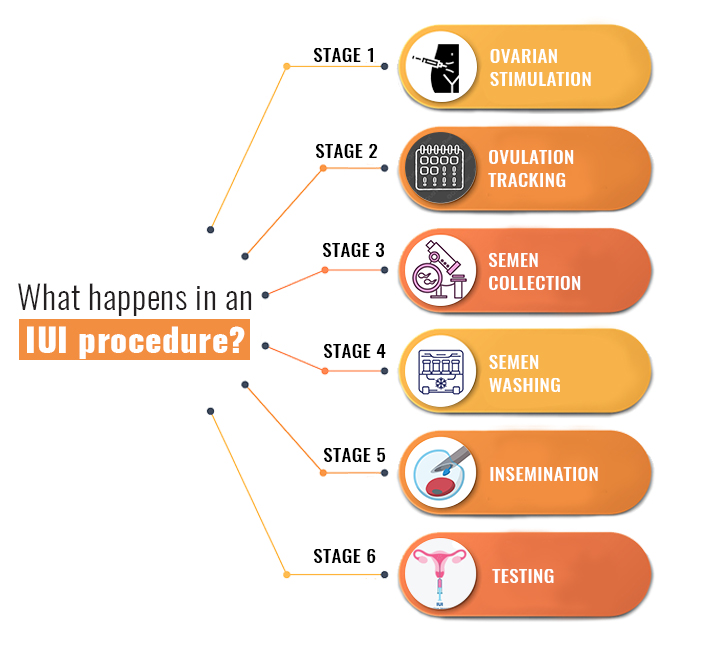 In this stage, the ovarian follicular development and the oocyte (egg) are sought to be matured with the help of the medications.

Then the doctors track the ovulation cycle, to determine the right day on which the procedure will be performed.

The doctor will require the semen sample of the male partner to analyse the morphological characteristics and the sperm count.

Immediately after the semen sample is received, the doctors proceed to wash the sperms to make sure the correct analysis can be done.

If the sperm cells come out to be having the ideal characteristics which are required for conception, then the doctors will proceed further to carry out the insemination process. In this process, the sperms are directly injected into the eggs.

Once the insemination is done, then after two weeks, the testing will be done. To test the pregnancy, you can either carry it out at home or the clinic in the supervisors of the clinician.

DURATION OF THE PROCEDURE:

The IUI procedure can be completed within 15 to 20 minutes

Once the procedure is over, the doctor will instruct you to lie on your back for a brief period.

It is not an inpatient procedure. Immediately after the procedure, you can get back to normal activities.

For achieving success in conception without encountering any complications, the female is supposed to take the following factors into account:

After the IUI procedure, the female must take proper rest. But mind it, rest does not mean that you are lying and something disappointment or distressing is running in your mind continuously. Rest means when both your body and mind are relaxed.

What we eat produces a direct impact on conception. So if you are eating healthy like:

CONGRATS!! YOU ARE MOTHER-TO-BE

Think like that only. Do not keep yourself gripped by the negative thoughts and vibes. If you stay positive then everything positive happens. To move on to the scientific approach, we should always be calm, positive and happy. By doing that our hormonal balance is maintained.

The doctors will prescribe you some of the medications after the procedure.  These medications are required for fulfilling the nutritional deficiency and making the immune system strong to fight against the harmful toxins and bacteria that on entering your body may interfere with the conception.

Pain relievers are not good for the health of your baby. If you intake such medications then you are lowering your chances of a healthy pregnancy.

The doctor will call you for the follow-up sessions. Make sure you are visiting him at the opposite time as it will be essential for tracking the conception.

It’s the game of Patience

I know you are excited to see the outcomes of the procedures. But unfortunately, you will not be allowed to take a test for 2 weeks.

The test comes out to be negative

Usually, the hormone levels have not reached that measurable extent which is necessary to make you ascertain that you are pregnant.

Moral of the story

You can still be pregnant if you have faced a negative result in the pregnancy test.

The test comes out to be positive

Once in a while, it takes palace that the intake of the medications responsible for carrying out induction in the ovulation escalates the HCG levels. So in that case, you may not be pregnant even if you have encountered positive results of pregnancy.

COST OF THE PROCEDURE:

The cost of the procedure may vary depending upon the severity of the causes and the other factors which may include age & complications arising out of the different medical conditions. The average cost of the procedure can be different as far as the variations in the clinic are concerned. It can begin from INR 15,000/- and can be extended to INR 3 to 5 lacs based on the additional benefits of the ART procedures.

Since you will get to enjoy the following, you will definitely find the cost worth: 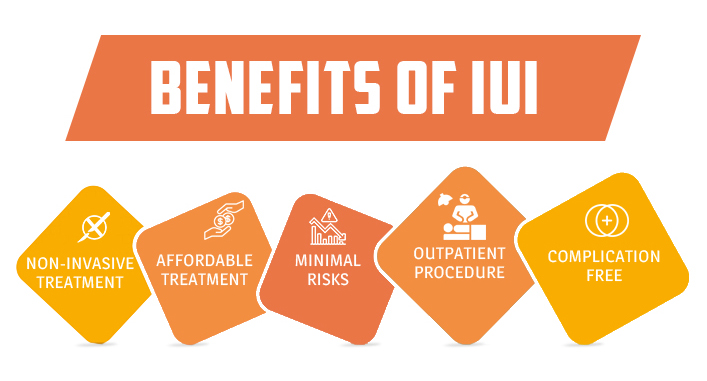 Owing to the simplicity and the safety, the chances to get encountered with the risks of the IUI are quintessentially less. But still, the following risks may come into origin if you are not taking the treatment from the reputed doctor:

If this procedure is not performed with precision and appropriateness, then there are high chances that the infection will be caused.

When the catheter is placed inside the uterus, then it is normal to get encountered with minimal vaginal bleeding.

A few spots of blood originating out of the vagina does not mean that there are some complications with your pregnancy.

If the embryo gets divided into multiple zygotes then multiple pregnancies may be faced. You may either come across as having either the doubles or triplets.

SHOULD I TRY IUI AGAIN AFTER EXPERIENCING A FAILURE?

Before losing your faith in the treatment after encountering IUI failure, you should give this treatment a try one more time.

The same therapy approach is used for about 3 to 6 months to escalate the chances of pregnancy.

Why should You choose SOFAT INFERTILITY AND WOMAN CARE CENTRE for undergoing IUI treatment?

Because of the following reasons, you are convinced to visit SOFAT INFERTILITY AND WOMEN CARE CENTRE for undergoing the IVF treatment:

The staff members whether the fertility specialist, nurses, ward-boys or lab technicians, everyone is highly qualified and satisfies their eligibility criteria. If you undergo treatment from here, then you are going to get guaranteed happiness.

Whether it is about the diagnosis or the procedural technologies, everything will be modern. With the latest technologies, it can be assured that you are receiving minimally invasive treatment with additional facilities. People who undergo ART procedures at our clinic are sure to visit us again to express their gratitude.

No matter what is the cause of your infertility, you can be the parents of a healthy baby. We leave no stone unturned to maintain our pace of 100% success rate. So you will never feel like your money invested has gone in vain.

HAVE A LOOK ON OUR SUCCESS STORIES:

Our patients are very happy with our treatment approaches. More than that, they are glad with the fact that the new born baby is completely healthy and does not have any birth defects.

We believe in growing relations with our patients, so that they consider us reliable in case they are suffering from any of the infertility problems.

We have performed variegated ART technologies on thousands of patients and each of them has come out to be extremely satisfied with the procedure.

Here are the views of one of our patient couples. This couple was not able to conceive owing to the defects in the sperms. Then they visited us with the hope of having a baby. We promised them to convert their hope to the happiness and the result is as follow: