If we consider the second opinion that female orgasm helps in conceiving then it leads to further questions that how it might work for boosting chances and should you go for this during the baby making sex.

The purpose of female orgasm is make them feel relax and sleepy so on the basis of poleaxe hypothesis that due to orgasm women lies down that may boost the chances of sperms to reach to their destination that can lead to conception.

Even the concept of lie down after sex is not cleared in the positive pregnancy yet as some studies have prove that lying down does not improve the chances of sperm retention. But the studies of IUI treatment claims that woman who remained horizontal after insemination were more likely to conceive.

Even the hypothesis in the favor of female orgasm suggests that it improves the chances for pregnancy. This hypothesis says that contraction of the uterus suck the semen and get deposited in the vagina during cervix that hence orgasm helps the sperm to reach to the uterus and fallopian tubes.

Even the studies consider the concept of semen flow back means the semen leaked out after sex. Researchers found that if the orgasm occurs a minute or less before the male ejaculation then the chances of sperm retention are greater and same in the case of orgasm up to 45 minutes of male ejaculation.

On the other side they notice that lack of female orgasm lead to lower sperm retention but these studies have not proved whether the female orgasm add to the pregnancy rates or not. 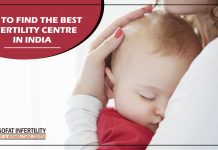 Tips To Find The Best Infertility Centre In India

How to handle stress during IVF?

What are the tests and treatments available for women with egg production problems?