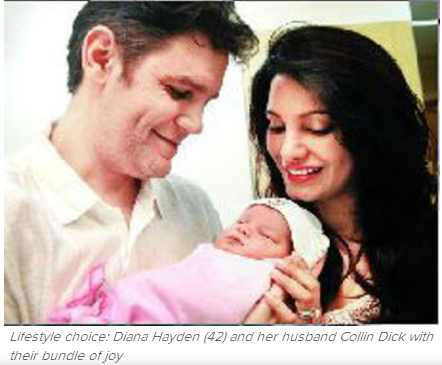 Formers Miss World Diana Hayden who is 42 years old has given birth to a beautiful baby girl at City Hospital in this month. Her baby is born from her frozen eggs which she had frozen eight years ago.

Diana has done a perfect job in delivering the perfect solution for those women who are struggling with biological clock. In 2005, she was 32 years and read about the egg freezing technique first time and she decided to take this procedure. She went to the hospital for froze her 16 eggs and followed the procedure of this approach which usually takes five months.

Diana told about her real life story that she was too much busy in her career in that time. She said that the women who are in career, they don’t need to think about her biological clock. After marry of a woman, everyone pressurize her to have a baby when she is not ready to conceive. A woman also has her own lifestyle; she has the right to decide about the things that when to do or when to not.

Dr Bhupendra Avasthi is a pediatrician of Surya Hospital said that daughter of Diana Hayden was 55cm long and weighed 3.7kg. The average weight of baby is 2.6kg and length is 48cm. This is the usual weight and length of Indian babies.

Egg freezing is vitrification process which consists of injecting hormones technique to stimulate the ovary to produce eggs and then eggs are collected and preserved in minus 196 degrees Celsius to future use. This procedure takes two-four weeks.

Hayden was diagnosed with endometriosis which resists her to get pregnant. She married with Collin Dick two years ago and after marriage she came to know about her condition that she cannot conceive a baby. At the age of 32 years she get information about egg freezing and couple decided to go for egg quality testing. Today this procedure worked beautifully for Hayden and blessed with a beautiful healthy daughter named Arya Hayden.

The teams of infertility specialists believes that Diana could be poster girl for egg freezing approach because she is the first Indian woman who has success egg freezing story.