Laparoscopy surgery is gaining fame thesdays in the medical sector. It is an easy surgery which is used to get visual access to the cavity behind the abdominal wall through a small incision and thus without any hassle. It is used to diagnose various problems, which can not be diagnosed by other visual tests and it is also used for treating infertility in every IVF centre in Punjab. This article will explain you the four cases or conditions in which laparoscopy proves to be useful.

Sometimes the scar tissues in the uterus of a woman can be a problem in conceiving a baby. Scar tissues are the tissues which are developed at the site of injury after recovery. So, if the woman ever had any accident near the uterus, then there are chances that a scar tissue is present there and it needs to be removed. Laparoscopy or hysteroscopy surgery can be used to remove the scar tissue.

It is a condition in which endometrial tissue which is the inner lining of the uterus grows outside the uterus. Sometimes it is the reason for severe pain, heavy menstruation and possibility of causing infertility. Swelling and scarring can be caused due to this extra tissue, which makes a hard environment in which eggs and sperm to survive. This tissue can also destroy the ovaries and can cause adhesions  tubal damage. In this situation laparoscopy can be used. Because of its minimal invasion lasering and cauterising can be done to remove the lesions caused by endometriosis.

The cystectomy process is used to remove cysts from a woman’s ovaries. Cysts in ovaries can disturb ovulation because of the mechanical compression to the tubes. Doctors can suggest to drain out the ovaries in which the cysts are grown too large. A minimal invasive method is needed to perform this procedure. So, laparoscopy is ideal for this surgery. Sometimes, ultrasound is also needed to guide the needle procedure for draining out the cyst. Laparoscopy makes this procedure painless and removes cyst without separating ovaries and surrounding muscles.

This procedure is used to remove fibroids from the uterus.Uterine fibroids are noncancerous and are grown during woman’s years of childbirth. Fibroids causes intense pelvic pain, irregularity in menstrual cycle and can cause blockage in uterus, which results in complications while conceiving. A minimal invasive method is required to remove the fibroids from the uterus. Thus laparoscopy is used for this procedure. It reduces the risk of scar tissue, heavy blood loss and other complications in conceiving a baby.

In all of the above cases laparoscopy surgery proves to be successful and has helped many women in becoming a mother and getting happiness. 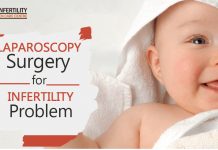 How Laparoscopy surgery is helpful for patients dealing with infertility problems?