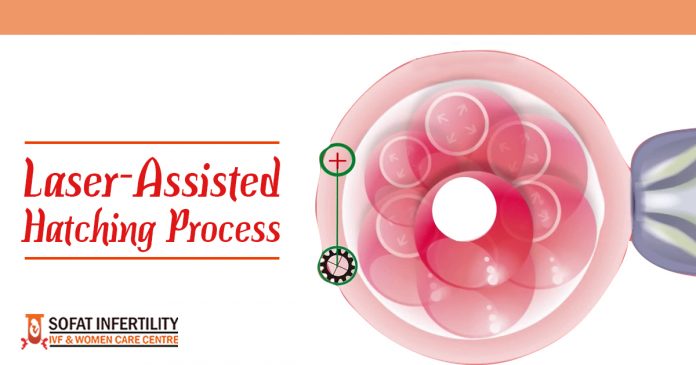 During the assisted hatching procedure a small opening is made in the outermost shell of the embryo which is also called Zona pellucida. This procedure is performed for successful breaking out the shell to facilitate the implantation process during IVF procedure.

This assisted hatching also called IVF hatching is done with three methods as with the acid Tyrode’s solution, with mechanical means as partial zona dissection (PZD) and laser hatching.

Earlier the hatching with acid Tyrode’s solution was quite common but these days laser hatching is getting common and even counted as the best among all.

How laser hatching is performed?

In this lab procedure, laser beam is used to hatch the outer shell to facilitate the embryo implantation. Circle of Colored beam of light is fixed to locate the point where the laser will fire. The laser beam used for hatching is invisible and only its effects can be seen.

Laser beam releases energy in the embryo shell and dissolves it. The laser is pulsed 3 times to create a complete gap in the shell. However, this exact technique may vary based on the power settings, technique and spot size. This hatching is done without affecting the embryo for a successful pregnancy.

Why laser is quite common than other methods of hatching

Assisted hatching with the laser is considered as safer, faster and easier as compared to the other methods and it can even boost up the chances of getting pregnant during IVF process.

Laser hatching can give benefit to the women with having age more than 37 with a successful IVF cycle. This procedure can be used for the patients with elevated day 3 FSH which are unable to get pregnant naturally. Even the patients with thick and abnormal eggshell have fewer chances for successful implantation of the embryo so laser hatching can facilitate the same.

This procedure can be beneficial for the patients that had prior failed IVF cycles. Due to all above facts, laser hatching is getting popular for the IVF hatching to ensure a successful pregnancy.

Understanding What Laser Hatching is!

Traditionally, after combining the eggs and the sperms in the Petri dish, the fertilized embryo was immediately transferred to the woman’s womb for implantation with an aim of achieving a successful pregnancy. However, with technological advancement and depth research, laser hatching became a breakthrough after the utilization of the acid Tyrode’s solution. This procedure is still used today, but laser-assisted hatching seems more preferred than the former

Laser-Assisted Hatching is almost performed in all infertility centres with the belief that it can increase the IVF success rates. But can the procedure really lead to successful IVF treatments?

In IVF, the embryologist can detect the chances for the embryo to hatch out through the outermost layer or not. If at all the embryo has fewer chances of hatching out of the outer layer, Laser Assisted Hatching is applicable.

With Laser Assisted Hatching, a laser beam of light is directed to the outer layer of the embryo to create a gap that will facilitate the easy hatching of the embryo. In other cases, the acid Tyrode’s solution is used to dissolve the outer layer before the embryo is transferred back to the woman’s uterus to implant easily.

Fertility experts believe that the technique has at least 50% chances of improving the IVF treatments. The technique is most applicable to patients with a poor prognosis. However, there are controversies regarding laser assisted hatching as some infertility patients still fail to attain successful pregnancies even after laser-assisted hatching.

Factors like the embryologist’s experience play a bigger part in rendering the procedure successful. In addition, there are various infertility centres with their own IVF success rates and protocols making the laser-assisted hatching results inconsistent. Also, the embryos differ from one woman to another.

The Laser Assisted Hatching technique is a micromanipulation technique with the good and the bad side. It is true that some couples have had successful laser assisted hatching procedures for a successful pregnancy, but there are also couples that have failed to attain successful pregnancies after the procedure. Some of the reasons for the controversies include;

The use of the acid Tyrode’s solution and the laser beam provides no guarantee of safety much as the laser-assisted hatching technique is commonly described as safe. Some embryos have been left damaged which reduces the chances of implantation

Some studies indicate that laser assisted hatching has increased the pregnancy rates and implantation rates. However, there is little proof that the technique can boost live birth success rates. With this, the embryologist, the couple, and the IVF expert must come to a conclusion of conducting the procedure or not.

When is Laser Assisted Hatching Recommended

Currently, Laser Assisted Hatching in India has proven to be an open widow to every couple undergoing IVF treatment. With this, some fertility experts and couples may choose to conduct the procedure during their first IVF treatment.

In other cases, fertility experts may advise their patients to opt for the technique due to;

Studies indicate that older women (36 and above) tend to produce thicker or harder zona pellucida than the younger ones. This makes it harder for the embryo to hatch out easily for implantation

According to the American Society for Reproductive Medicine (ASRM), laser assisted hatching can help increase the success rate of implantation in women with at least two previous failed IVF treatment cycles. The procedure facilitates easier hatching for easy implantation.

The Follicle-stimulating hormone (FSH) is responsible for stimulating the ovaries to develop follicles. Low levels of FSH indicate that a woman’s fertility status is good while fluctuating FSH indicate threats for conception. Women with a high level of FSH can get pregnant, but there can be complications with the pregnancy.

In IVF, laser assisted hatching is performed on the embryo to eliminate chances of implantation failure

Research shows that frozen embryos or thawed embryos have hardened Zonas that automatically makes hatching difficult. The laser assisted hatching practice will help make a gap through which the embryo can easily hatch out for implantation.

Scientifically, the laser-assisted hatching procedure is a high-tech practice conducted with the high expertise to guarantee desired results. Due to the rising percentages of infertility cases, laser assisted hatching is a breakthrough technique to improve the ART treatments and increase the success rates once conducted meticulously. Some of the advantages of Assisted Laser Hatching include;

The procedure of laser assisted hatching increases hopes of implantation since the Zona Pellucida is partially ruptured.

The procedure of blastocyst culture refers to the period of 3 or 4 days in which the embryos are further monitored before being transferred back to the woman’s uterus. With Laser Assisted Hatching, Blastocyst Culture is possible

Before the laser-assisted technique is conducted, the embryologist is able to entirely screen the embryos to identify any DNA defects, structural defects or other issues. Generally, the procedure is called Trophectoderm biopsy. During this procedure, sperms from the embryo are retrieved and screened/tested for chromosomal abnormalities or specific gene defects.

India is one of the leading medical destinations in the world, due to its cost-effectiveness and supreme expertise compared to many other countries. Generally, the laser assisted hatching cost in India ranges from Rs. 20, 000 to Rs. 30,000. Factors that influence the cost are;

Should I opt for Laser Assisted Hatching or Not?

Women or couples recommended for laser assisted hatching are those with;

With laser assisted hatching, there is less handling of the embryo since the procedure is conducted with the help of a 1.48-micron infrared diode laser that creates a gap in the Zona.

The laser produces beams of energy that strikes the Zona layer of the embryo to create a gap. Normally, the energy is directed twice or thrice to make sure that enough space is created. The laser does the work without any mechanical device touching the embryo.

With mechanical/manual hatching, the embryo is covered using a thin drawn needle. Generally, a micromanipulator is used

With this technique, a micropipette containing acid Tyrode’s solution is brought near to the Zona Pellucida and the acidic solution is gently expelled over an area of 25 to 30mm. This is done until the portion dissolves to the inside.

Once this is done, the embryo/s are washed thoroughly and cultured until the time of transfer

Where can I attain a safe Assisted Laser Hatching?

Sofat Infertility centre is one of the leading infertility centres in India pioneering the latest and advanced infertility practices. Laser Assisted Hatching is one of the effectively performed procedure in a state-of-the-art facility by experienced embryologists. Dr. Sumita Sofat is the chief-in-charge of the various Sofat chain infertility clinics in India. With enormous expertise and experience, the fertility expert has brought forth healthy babies for the once childless couples. The fertility expert is well acquainted with various Assisted Reproductive Techniques such as; 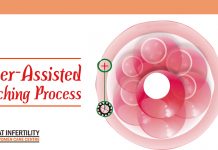 How laser-assisted hatching is helpful in increasing the chances of pregnancy?