Symptoms: There are no obvious symptoms of low sperm count. The major symptom of this problem is the inability to conceive a baby.

The low sperm count may be because of various risk factors. These factors may include:

Avoid some factors that can affect your sperm count and its quality:

Semen analysis test is to diagnose the low sperm count. This test is generally examined under a microscope to count the sperm count within squares that’s too on a grid pattern. Sometimes, computer is used to measure the sperm count. Doctor will collect your sperms in a special container. Usually, a sperm takes around 40 to 76 days to mature.

Doctors take two or more semen samples to ensure the consistency between different samples. The doctor will need the following things to ensure the accuracy in a collection:

Treatment for this problem:

Surgery: This problem can be surgically fixed or by the repairing of an obstructed vas deferens.

Treatment of Infection: An infection of the reproductive tract can be cured with the antibiotics but it doesn’t ensure to restore fertility.

Assisted reproductive technology (ART): In this treatment, sperm of the male are obtained through normal ejaculation and then these are inserted into the genital tract of female which is used for vitro fertilization.

In case, if low sperm count can’t be treated then there are no chance for a man to father a child. In this case, you and your partner can consider to take sperms from donor or to adopt a child. 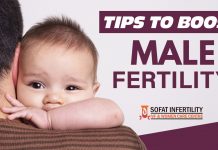